Compliments come in all shapes and sizes

Today – March 1st – is World Compliment Day, and we all love compliments! They make us feel good — both giving and receiving them. And it boosts employee engagement. Feeling valued and appreciated are basic human needs. Appreciation is also foundational in relationships and compliments help us communicate that appreciation we feel toward one another. Scientists have found that receiving a compliment actually lights up the same parts of your brain that get activated when you get paid a monetary award.

They come in all shapes and sizes. Yet, compliments, no matter how big or small, can make anyone feel good. It’s the little things like sincere compliments that can change how people view and relate to you, and just one good compliment can make someone’s entire day better. Today, on world compliment day, dish out your best keeping the 7 tips and tricks in mind.

Discussing the power of compliments within your team? Click the button to download the ‘Shower of Compliments’ training script! 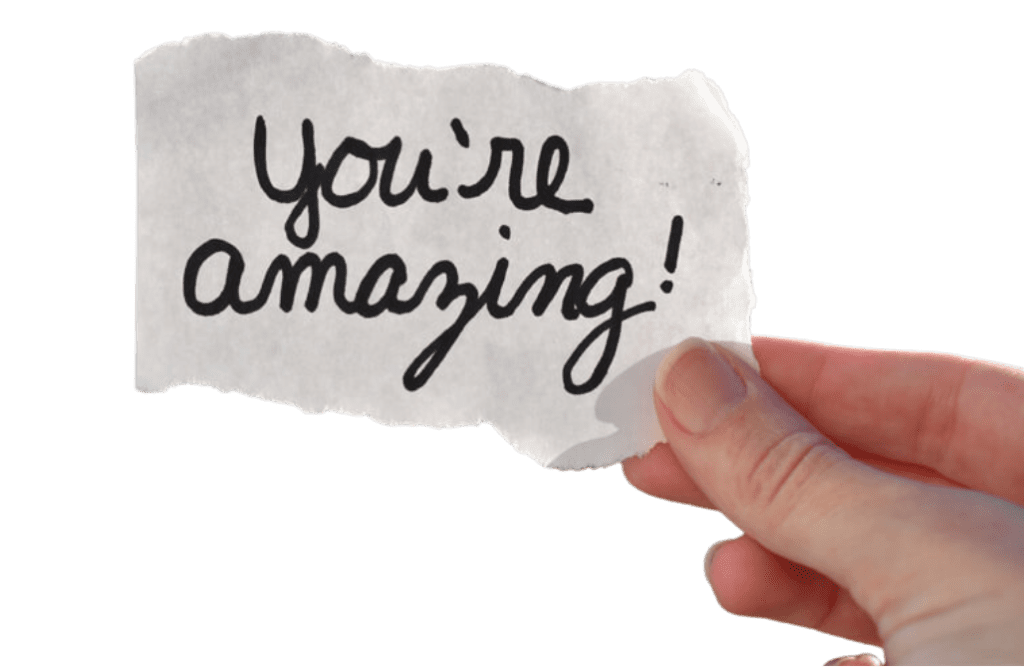 When it comes to compliments, one size does not fit all. Compliments are designed to make people feel good about themselves, so make sure the compliment is all about the specific person you’re speaking to. Mass-produced compliments lose their meaning pretty quickly because the more personal, the better. People feel much more appreciated when you say exactly why you think that person deserves some praise.

The best compliments are specific. They refer to character traits, behaviors, or appearance. If you just say, “Good job,” that’s all fine and well, but it’s not nearly the compliment it could be. Back your compliment up with examples of why you think that person did do a good job. Including examples makes your compliment seem more sincere.

Give compliments 100%, don’t ever tell someone that something they’ve done is great…because what he or she was doing beforehand wasn’t so great. They are meant to make people feel good, and that’s it. Don’t bring other things into it, because comparing the now and the then can just make someone feel bad about themselves. Do not negate a good compliment by making it back-handed or rude. That accomplishes the exact opposite of what a compliment should do for a person.

Say something that isn’t obvious. Another good tactic when it comes to giving genuine compliments is to pick out something that most people wouldn’t notice, something that shows you’re really paying attention to the person. Non-obvious compliments are the kind that people remember and cherish for the rest of their lives.

7. And of course, receive compliments with grace

People feel uncomfortable receiving compliments because they were taught (or might think) that accepting them equates to bragging, but it’s not. Compliments are about communicating with those around you what you appreciate and what’s working. Learning how to graciously accept a compliment is just as important as learning how to give them. After all, denying a compliment is another way of telling someone that they’re wrong or that their opinion or perspective is wrong. When in doubt, a simple “thank you” works.

Now, it’s your turn. Go to your team, your customers, guests or family/friends, and practice giving compliments with these 7 tips, and/or use the Shower of Compliments script to help you facilitate a fun energizer on this world compliments day!

Discussing the power of compliments within your team? Click the button to download the ‘Shower of Compliments’ training script!

Rozemarijn van der Post / About Author
Rozemarijn has 11 years’ experience working in the learning and development industry. She pairs her in-depth knowledge of guest experience with HR and learning and development. Her international perspective combined with her passion for developing others, has driven her ability to create innovative, growth-oriented, and sustainable learning solutions for her clients and target learners at any level within an organization/team/company.

Starting with microfinance trainings in Jordan to now working with teams and clients from all over the world, based in the Netherlands, she has a genuine interest in people, different cultures, learning and a personal purpose of helping people grow and reach their potential.
More posts by Rozemarijn van der Post